Pursuant to this cost-shifting provision, Kleiner is now asking Ms. Pao to reimburse its litigation costs in the amount of $972,814: $864,680 in expert witness fees, $59,000 in deposition costs, and $40,000 in other costs. You can see here the memorandum of costs that Kleiner’s lawyers filed with the court.

Even more interesting, Kleiner is reportedly offering to waive its right to recover litigation costs if Ms. Pao agrees not to appeal the trial court decision. Christina Lee, a spokeswoman for Kleiner, had the following explanation in a statement quoted in several newspapers and magazines (including Forbes): “We believe that women in technology would be best served by having all parties focus on making progress on the issues of gender diversity outside of continued litigation.” 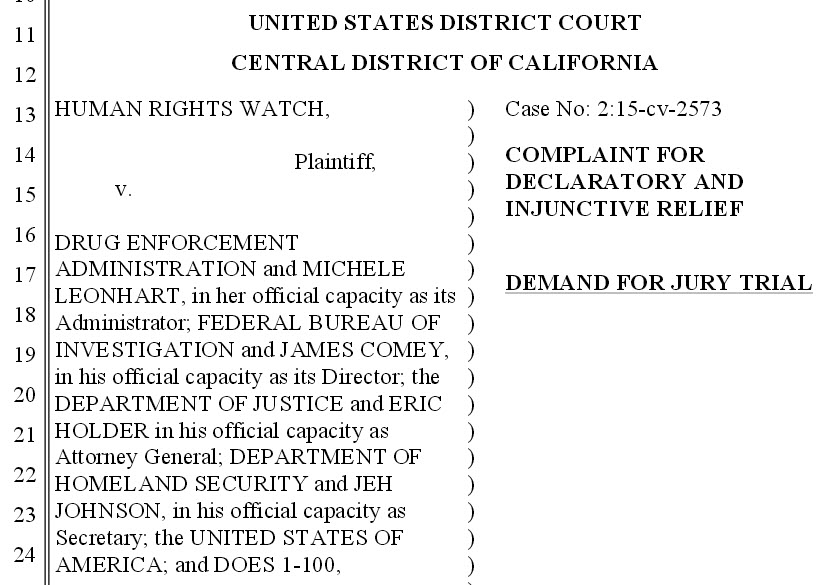 The First Amendment argument is that the mass surveillance program unduly burdens the free speech and free association rights of HRW and its staff, including the right to communicate anonymously, the right to associate privately, and the right to engage in protected advocacy free from government interference.

The Fourth Amendment argument is that the mass surveillance program violates HRW’s reasonable expectation of privacy and consistutes an unreasonable searche and/or seizure.  (For a partial analysis of the Fourth Amendment issue, see this January commentary by Marjorie Cohn, a professor at Thomas Jefferson School of Law.)

Whether or not they’re interested in US constitutional law, French lawyers may find the policy issues behind this American lawsuit quite interesting, because the French legislature is right now  considering authorizing just the kind of mass surveillance program challenged in the HRW lawsuit.  HRW is especially concerned about what could happen to its valued contacts in foreign countries if the US government were to share with foreign governments some or all of the information gathered through its mass surveillance program. As explained by Dinah PoKempner, general counsel of HRS, “At Human Rights Watch we work with people who are sometimes in life or death situations, where speaking out can make them a target. Whom we communicate with and when is often extraordinarily sensitive – and it’s information that we wouldn’t turn over to the government lightly.”  It’s just one example of how a mass surveillance program can have spillover effects far beyond the intended goals (combatting drug dealing, combatting terrorism, etc.).

The French bill, the “projet de loi relatif au renseignement,” is scheduled to be considered as early as today, April 13, 2015, under an accelerated legislative procedure that precludes a second reading. You can see the bill here.  You can read an American commentary on the French bill here.  And you can read a recent French article on it, from Le Monde, here.

Meanwhile, several human rights organizations, including Amnesty International, submitted an application last week to the European Court of Human Rights challenging British surveillance practices.  You can read the application here.  And you can read an American commentary on it here.